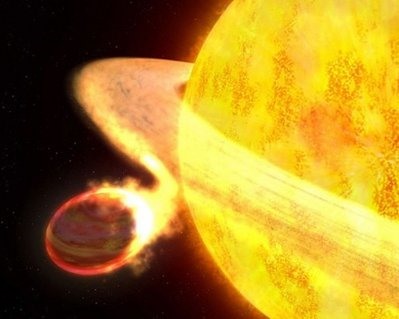 According to NASA, the star is currently consuming the planet Wasp-12b.

But don't worry about missing this phenemona. Scientists say the star could take 10 million years to swallow!

"Wasp-12 is a dwarf star located approximately 600 light-years away in the constellation Auriga. The exoplanet was first discovered by the UK's Wide Area Search for Planets (Wasp) in 2008."

Want to master Microsoft Excel and take your work-from-home job prospects to the next level? Jump-start your career with our Premium A-to-Z Microsoft Excel Training Bundle from the new Gadget Hacks Shop and get lifetime access to more than 40 hours of Basic to Advanced instruction on functions, formula, tools, and more.

Self-immolation + cannibalism simultaniety'll get you every time.